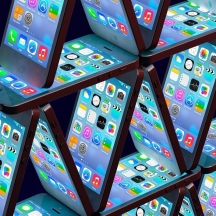 We look at how we will communicate and relate in the future, how politics and media will look in an era of data abundance, and how all this will shape society. We also examine the role of intelligent machines and how they will be integrated into our society. Amber Davisson, David Gunkel, and Oskar Triebe join the regular panelists. Recorded 10 December 2017.

Brought to you by Fling: Urban Drone Delivery. Get it fast. Fling it!

Welcome to Let’s Make The Future.

Our topic today is The Future of our Digital Society. We will start talking about how we will communicate and socially relate in the future, how politics and media will look like in an era of data abundance, and how this will shape society. In the second part we will focus on the role of intelligent machines in our society and how they will be integrated or even become part of the society.

Let’s start with a quick introduction round:  I’m Daniel Valenzuela currently based in Munich working on the future of factory work, Michael, Hos and Sara

David Gunkel: He is an award-winning educator, scholar and author, specializing in the study of information and communication technology with a focus on ethics. Formally educated in philosophy and media studies, his teaching and research synthesize the hype of high-technology with the rigor and insight of contemporary critical analysis. He is the author of over 50 scholarly journal articles and book chapters, has written and published 7 influential books, lectured and delivered award-winning papers throughout North and South America and Europe.

David J. Gunkel is Distinguished Teaching Professor and Professor of Communication Technology at Northern Illinois University. He is the author of The Machine Question, Hacking Cyberspace, Thinking Otherwise: Philosophy, Communication, Technology and Of Remixology: Ethics and Aesthetics After Remix (MIT Press).

Amber Davisson: is an Assistant Professor of Communication at Keene State College, USA. She is the author of Lady Gaga and the Remaking of Celebrity Culture (2013) and the co-editor of Controversies in Digital Ethics (Bloomsbury, 2016) and Theorizing Digital Rhetoric (Routledge, forthcoming). Her interdisciplinary scholarship on identity, politics, and digital technology has appeared in such journals as Rhetoric & Public Affairs, Transformative Works & Culture, Journal of Media & Digital Literacy, Journal of Visual Literacy, and American Communication Journal.

Oskar Triebe: I wouldn’t call myself an expert of anything. In fact I am sceptical of anyone called “expert”. I am just an informed and active citizen.”

Oskar is a Machine Intelligence Engineer at Merantix. He is a top 1% graduate from ETH Zurich and Stanford University. During his studies he founded and led the Stanford Digital Shapers organization. Before joining Merantix, he worked for a cyber security startup in Silicon Valley as an AI Engineer.

NOTES FROM MICHAEL CURRIE during the conversation

Loss of history with private web

is radicalization good or bad?

big data, what we do with big data

sets of data, so large, can no longer be processed by humans

what is the danger

I was asked to speak in front of a group of PR and marketing firms here in Southeast Asia, and they are very excited about AI.

the utopia is that goods and services arrive in front of you before you even realize you want them.

what are the negatives?

in society mix of machines and humans

as an extension of

you are the product not the customer

even unconscious machines are dangerous

do robots and algorithms have rights?

these things are going to have social position?

do they have any claim?

This episode’s future trend discussion topic the future of our digital society with this David and.

Brought to you by.

Delivery get a. Feeling it.

If you have a negative connotation of this happening which are very much understand if it’s your job to document this mix and what MacArthur But what is your opinion regarding versus private discussion on sort of the developmental democratic society what do you think about this do you think that this might be actually something that is necessary for the growth of the critical. Step further development of our society I think it’s absolutely necessary you know it is the kind of negative valence that I have for a lot of this and I should start by saying that I study some of the less pleasant parts of the web so I think some of the negativity that I have comes from the fact that I spend time. To really unpleasant things just to put it that way so I know it probably is coloring the way that I come to the conversation with that so there’s a long history of what we call public’s encounter public’s account or public is this kind of parallel space where groups who are not part of the majority can get together and refine their message they can share ideas and they develop a kind of solidarity so when they go out into the public they recognize that they’re not alone because the public’s fear can be deafening the majority can really feel like it. It’s the only opinion and so having those private spaces where you get together with others and you begin to realize that you’re not alone are so important for any kind of social movement whether we’re talking about ones that we like or ones we don’t like wait for any movement it is necessary to have a space where they get together and develop solidarity and also develop a message there’s a lot of language testing that goes on in private spaces right you develop you practice saying your opinions out loud and so you get better at articulating them better at explaining them and so that when you walk out into public spaces and those opinions are challenge you know what it is you want to say and so that whole notion of having private back and organizing to test strategies to develop ideas is used by pretty much every minority group and its importance in the negativity that I associate that probably has to do with the nature of some of the groups that I study Amber could I challenge you on that because it seems to me that what you’re describing is how accurate chambers are formed because you have groups of people they get together and reinforce each other’s beliefs and learn how to quote unquote refute the opinion of the majority and you know where to feel comfortable in their opinion and that has a positive connotation if their opinion is correct there is a positive in some way I’m not quite sure how to characterize it but it also could be very bad I when I was in university I was radicalized into becoming a vegetarian by some friends there and then read some literature and got that reinforced but you can imagine that people can get radicalized into far worse past times than vegetarianism and just in general is not contributing to the polarization of our politics the availability of finding that one percent of one percent of the population that believes your belief I think it’s too simplistic to call any of this good or bad I think these are ways that we develop messages and you’re right like there’s absolute the potential that this I mean not just the potential This is how radicalization happens right you’re absolutely right but whether or not that radicalization is good or bad as a much greater area I think I feel. Less comfortable making those kind of statements I will say that most of us I think at this point because you’re not just thinking about the echo chamber of the Internet you have to think about the way the mass media functions and all this right that you’re being told that this is the larger public opinion you’re being told that these are the major issues this is what matters rape and so somewhere between the mass media and then the echo chamber of the Internet you start to believe that you’re the only one who has the idea is that you have and so you just kind of sit there be quiet and I do think you have to find a safe space to voice your opinions before you’ll voice them within a larger conversation and also say that people being quiet is just as dangerous as people getting educated in echo chambers that statement makes any sense people being quiet is just as dangerous as people being radicalized because if we don’t know what people believe then we have no way to have larger conversations.